Do you know the proper way to hang and display an American Flag? 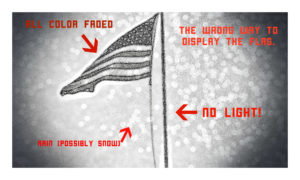 A diagram of the wrong way to display the flag

Most people learn how to hang the flag in the scouts or in the military.  We, (the person writing this blog) learned it in an Encyclopedia Brown book when the answer to the mystery was “American Flags cannot be flown in the rain at night”.  Okay, so that wasn’t totally accurate, but hey it was a book for children, and it stuck with us enough to have us look up the actual rules for displaying the flag. While there are loads of websites with full details (including the one for the U.S. Government) here is your quick cheat sheet: 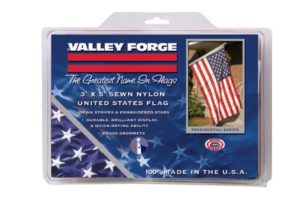 ♦ American Flags are not to be flown after sunset unless they are properly illuminated. (Yeah, properly is a little vague, but they mean that you can see the stars and stripes)  The below solar light fills the bill and since it’s solar and clips right onto the pole you don’t have to worry about recharging or changing batteries to keep in line with this rule. 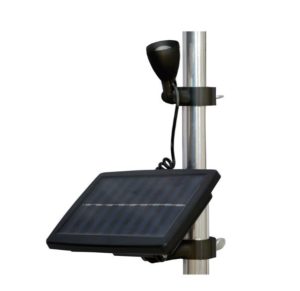 This Solar Flag light is available to purchase in-store or on Acehardware.com

♦ When flown with another flag, the flag is to be the top flag on the pole.

♦ When displayed crossed it is to be the flag on the left.

♦ When hung from a window or ledge without a pole, the blue part is to be at the top to your left (the flags’ right). 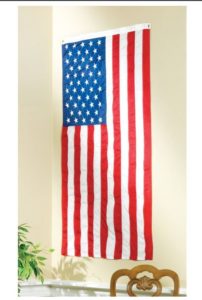 The correct way to hang an American Flag

♦ During a national day of mourning the flag is to be flown at half staff.

♦ If the flag is displayed not hung, but on a shelf, it is to be folded in a triangle with the blue part on the outside.

Really that’s all you have to know. Well except that if the flag gets worn out, or if it falls on the ground you are supposed to dispose of it respectfully.  We know that a lot of people might not know how to do that so we have a solution. Bring in the flag that needs to be retired, we collect them all in a special flag retiring box and take them to our local Boy Scouts for proper disposal. Oh, did we mention that our recycling service is free?  Now you know the basics of flag display and disposal, so you too like Encyclopedia Brown can now know that the scout was riding into a trap because the flag was flying un-illuminated in the rain. 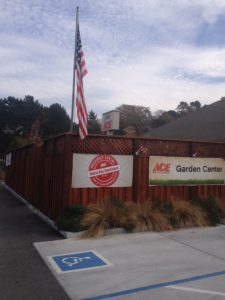