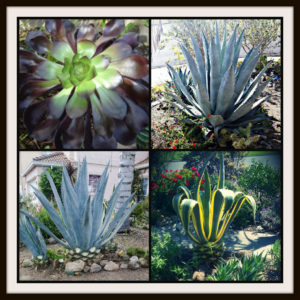 Succulents from the garden of our master gardener Georgia Ruiz. (including agave)

Agave is but one of the hundreds of succulents native to the Americas. Along with Aloe (which is native to Africa) it is the succulent that most people could name if they saw it, and name what it is used for. But Succulents encompass hundreds of plants, and have been around (according to a study at Brown University in 2011) for between 5 and 10 million years!
Here in California we see succulents everywhere, but there are some basic things that you should know before tearing out that lawn and putting in that rock garden.
First things first, what is a succulent? Botanists and gardeners have been arguing this question since the first of the cacti were brought to Europe. While we enjoy a good debate (especially one that at some point has to include tequila) for our purposes we are going to side with the gardeners. Succulents are, for lack of a better simile, the camels of the plant kingdom.  Succulents get their name from the Latin for juicy and are marked by thick leaves or bodies (like a cactus) that store extra hydration that the plant can live on when necessary. In this respect we are not going to talk about air plants or bulbs, but only what most people would consider when the word succulent comes up.
Succulents make fantastic house plants, as once they are potted, they require little care and even someone with a brown thumb will be hard pressed to kill them. But, they are not indestructible. Succulents still need some water, and if you leave them in direct sunlight most will still get burnt. Most importantly if your succulent gets too much water it will die.  To prevent over watering your indoor succulent it is important to set up its pot correctly. You need lots of drainage. The best way to achieve drainage when planting in a pot is to use the broken shards from last year’s pot and form a layer at the bottom. You can however use stones and rocks to form this layer, the key point is something that will allow the water to drain through and keep it away from the root of the plant.  You will know when your plant needs more water because the leaves will start to pucker, like your fingers when you have been in the bathtub too long. If the leaves start to lose their firmness and get mushy, then you are over watering and you will want to cut back until the leaves shrivel a little.
Second, your succulent is not a rose, or a carrot if you give it the nutrient rich, ultra-fertilized soil that you use on your garden, it will not thrive. Succulents evolved in harsh climates with minimal nutrients. So if you are potting a succulent it is best to use a potting soil specifically formulated for succulents, such as the Edna’s Best cactus mix. You can mix your own, but we will talk about that when we get to outside succulents.
One of the best things about succulents besides how little care they need is that they are very slow growers. This means that you don’t have to worry about them getting too big for their pot anytime soon, and you can plant multiple plants in one pot without having to worry about them crowding each other too quickly. Succulents are also easy to propagate. Some simply drop a leaf that then turns into a new succulent. They can also propagate through division, and you can propagate them through cuttings.
While succulents make great indoor plants they have added benefit for those of us who live in the bay area as outdoor plants.  Succulents are low-water tolerant, a great trait in our drought prone climate. They are also, due to their moisture filled leaves and bodies, fire safe. Most succulents are hardy plants, meaning that they can withstand the wide range in temperatures that can happen quickly in the Bay Area.
Succulents are also great plants if you are near protected areas as they do not become invasive due to their shallow root system. Plus, as before mentioned many succulents are actually native to Northern California. Also, due to the low water used when growing succulents you are less likely to have weeds in a bed that has succulent ground cover.
If you are going to plant succulents outside here are a few things to remember:
-Don’t put them at the bottom of a slope, or in a depression. They need really good drainage.
-Check the sun needs of the plant, not all of them like direct sun and some of them are from tropical forests which require dappled or partial sun.
-Don’t use the normal mulch and fertilizers that you use for your vegetable or rose gardens.
-To make your own planting mix, you need to mix in sharp sand or pumice with your soil. You can also add gravel and crushed rock.
-Don’t let dead leaves or other organics decompose in the succulent bed, this helps keep bad bacteria and other pests away from your live plants.
-Don’t try to make your own tequila. The correct type of agave takes a lifetime to grow, and much like champagne can only be from the Champagne region, tequila not from Tequila is simply mescal.

succulents in our nursery at Marin Ace